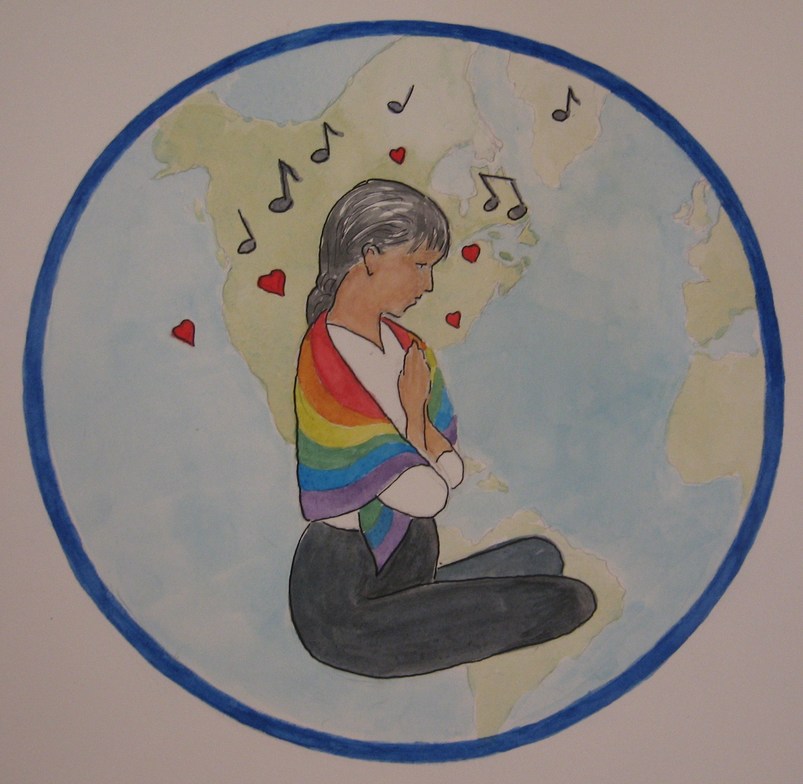 After sharing some nurturing food and fellowship together at our most recent Congregational Gathering on March 20th, we embarked on a series of interactive and thought-provoking exercises focusing on our current identity as a family of faith.  The result of our collective input can be found in the following description of “Sarah” who is meant to personify our congregation.  Thank you to Isobel Gibson for providing the visual depiction of "Sarah".

A Snapshot of Sarah

Sarah is right at home on the Sunshine Coast, from her appearance, to her values, to her love of the outdoors.  Her clothes, made from natural fibres, are casual yet stylish, her Birkenstocks speak of her free and independent spirit, and through her informal way of being and open-mindedness, she is welcoming and inclusive of all.  She is musical, spiritually diverse and naturally caring of others, though also somewhat socially awkward with people different from herself.  She’s a bit embarrassed by living up on the hill away from it all.  She has trouble whenever someone offers her praise, not knowing what to do with it.

Sarah listens to CBC radio and watches a couple of TV shows – “So You Think You Can Dance,” “Ellen,” and “Call the Midwife”.  She likes to take summer holidays and winter breaks that are comfortable and affordable, and in the outdoors.  She values honesty, loyalty, wisdom and humour in her friends.  In being introduced to new people, she especially likes to be called “my dear friend.”  She loves good food, potlucks and feeding others.  If she was given $100,000 she would probably spend some of it on her home, and the rest on a new greenhouse to grow crops for the community.

Some time ago, Sarah’s much-loved home, a brand new building only 20 years old, began to show signs of leaking and deterioration.  After some exploration into the cause she had to face the reality of her home having all the same signs as a leaky condo.  Undaunted, she set to work. She organized the reconstruction project, raised the money through donations, loans and grants, and put all her energy into the problem.  In a way she was pleased to have a focus for her life; not one she would have chosen of course, but something that she could commit to.  It was a test of her resilience, and once the repairs were completed, and she could see her way to paying off the mortgage in her lifetime, she was proud of herself.

Unfortunately, though, with her single-minded focus on her home, she neglected her own health.  Her tendency to care for the world outside herself – other people, her home – better than for herself became obvious.  No longer having the problem of a leaky building as a distraction, she noticed she didn’t feel too well.  She had low energy, and was increasingly uncomfortable in her own skin.  She couldn’t trust her own judgement anymore.  She did her best to ignore these and other symptoms, but eventually she sought medical advice.  She was distressed, shocked even, to learn that she had bone cancer.  This wasn’t something that money could fix. She had to make a personal commitment to herself at all levels.  She was determined not to succumb, for that would mean giving up her values and beliefs, and her hopes and dreams for the future.

Sarah began a rigorous regime of weekly treatments and intensive counselling.  At first she experienced some inner conflict; was this all really necessary, she would ask herself.  It was painful, and took her energy, which was already depleted.  Yet over the weeks, she noticed a difference.  She had a transfusion and that really helped.  Her mood has improved; she is laughing more; and she looks forward to the counselling sessions.

Meanwhile, her hormones have been out of balance.  At her age she thought it must be menopause, but to her great surprise she has just found out that she is pregnant!!  This was not planned at all, never anticipated as part of her life at this stage.  Yet there it is!  The evidence is before her every day, as she sees her body changing shape.  She watches her favourite TV shows with new eyes, wondering when it will be time for her to call the midwife!  Whenever “So You Think You Can Dance” comes on she laughs at herself as she rearranges her expectations of herself.  Before she knew she was pregnant the steps in her favourite dances were so familiar and easy.  Now, who knows what new dances she will learn?  She is excited about the future, eager to explore the abundance of opportunity that awaits.